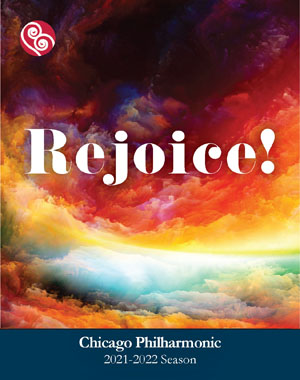 The Chicago Philharmonic, one of the country’s finest symphonic orchestras performs main stage subscription based concerts at Pick-Staiger Hall at Northwestern University and Nichols Concert Hall in Evanston, as well as approximately 50 performances per season in downtown Chicago as the official orchestra of the Joffrey Ballet.

The orchestra also makes regular appearances in many locations throughout the Chicago area; including Ravinia Festival in Highland Park and Symphony Center in Chicago. The Chicago Philharmonic’s season also includes their chamber music series that features twelve concerts performed in Park Ridge and Hinsdale.

A central goal of the Society is to bring the excitement and engagement of live music performances to audiences throughout metropolitan Chicago. The Chicago Philharmonic is dedicated to building new audiences for serious music at the highest professional level of symphonic performance as well as instrumental, dance, vocal, documentary film, literary and visual works of art.

Orchestra patrons are among the most highly educated, affluent, cultured and sophisticated of all performing arts audiences. Reach this coveted audience by placing your advertising message in the Chicago Philharmonic program that will appear from September through Spring providing your business with nine months of exposure to the most influential consumers in our marketplace.